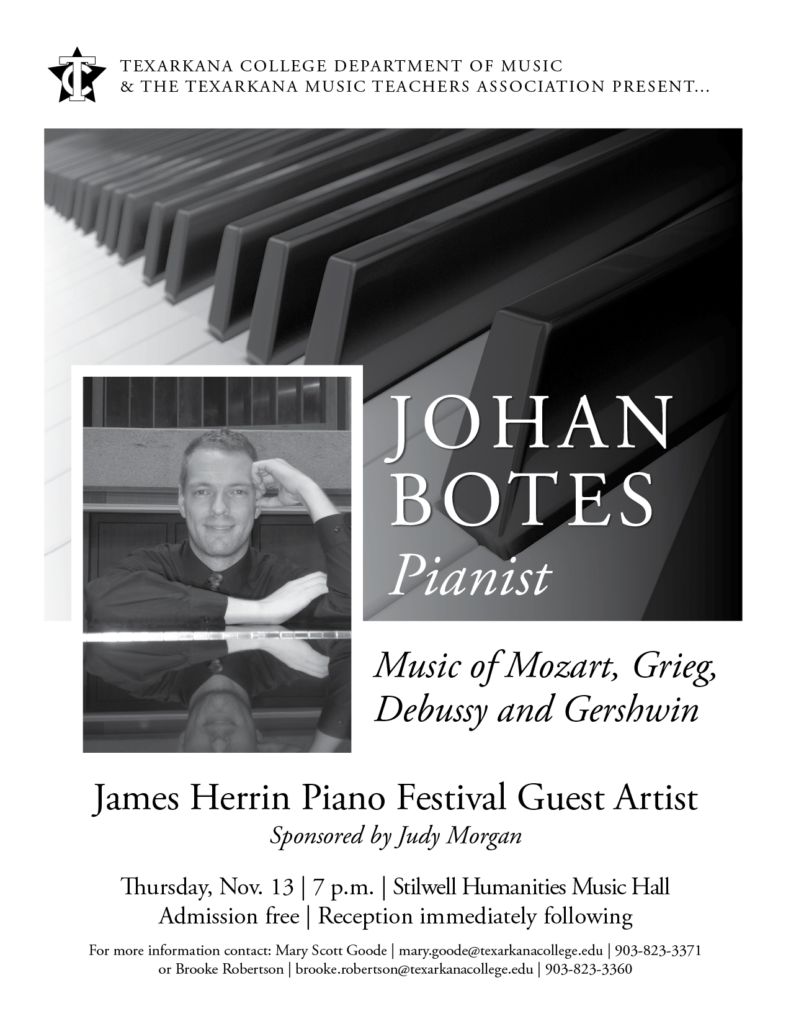 He loved roller coasters, sweaters, and discovering young musical prodigies. But most of all, James Herrin loved his art.

Herrin, renowned in Texarkana College’s music department as one of its best piano instructors ever, truly excelled in his field, whether it was playing organ at First Baptist Church Moores Lane, accompanying the Texarkana College Choir, teaching in the piano prep division, or in private lessons. He always played beautifully, perfecting his technique so as to keep up with modern contemporaries. Betsy Frame, who played piano with James at First Baptist Moores Lane puts it this way: “As opposed to most of the rest of us, who went to school and simply learned our art and were done with it, James never stopped learning. He kept reviewing and honing his technique, never wanting to compromise anything. [Chuckles] He would even tape the services and listen to them over and over to see where he could improve.”

“Oh, you hear of those select few piano virtuosos who practice hours on end in a day, well he would continue above and beyond that,” says Sharon Skinner, long-time colleague and friend of James and former secretary of the Humanities Division at TC. “Man he could play. I was here for his 20+ years of service to this school, and I can tell you, there was never anyone so dedicated to both his playing and his students. He drove them to be exceptionally qualified and exemplary.” James Herrin proved so by taking his kids to many different festivals and contests, usually with his students winning big. It was this sort of determination and drive to see not only himself, but also especially his students excel and exceed at piano that made Herrin truly great.

James Herrin’s personality was one of quiet motion, always on the move to advance in the right direction. Don Howren, Minister of Music at Faith Baptist Church describes James as having the most subtle, dry, and quick wit that you would ever know. “There were times where he would be rehearsing or performing an incredibly difficult and technical piece, enthralling his audience or the choir, and then he would improvise some funny little ditty or couple of bars to lighten the mood and get people in high spirits.”

It was his way of encouraging people that Herrin kept with him until his death. Michael Cooper, Director of Drama at Texarkana College and colleague of Herrin, recounts Herrin’s last days. “We were drawing to a close at a Yulefeste rehearsal, and the kids were really unmotivated and kind of dreary. Now this was something I had never seen him do before, but James, at one point, just got up from the piano and started to dance, swinging around to the music, getting the kids to join along. He really made it so the kids were having a good time. Unfortunately, that was the last time I saw him. He was gone the next day.”

James Herrin died from a brain stem stroke at the ripe young age of 49. Herrin had come back from Thanksgiving break, complaining of not being able to taste anything and not realizing that he had had a small stroke during the break. Later in the week after the Yulefeste rehearsal, James started suffering from nausea and massive headaches and was admitted to Wadley Hospital. He never left the hospital.

In honor of James Herrin and his epic legacy of piano skill and teaching, Texarkana College and the Texarkana Music Teachers Association host the annual James Herrin Piano Festival to insure that his ambitions of seeing students grow and mature through keyboarding continues. Piano students of all walks of life, whatever their age or skill level, are invited to come and perform for jury and competition, garnering excellent college reception as well as prestige amongst their own peers. Anyone who knew James Herrin would know this festival embodies all that was his spirit and his passion for music. The Music Department at Texarkana College and the Texarkana Music Teachers Association hope that all performances presented live up to James Herrin’s standards, and will bring honor to his reputation and legacy.