Board of Trustees swears in new members from Western Bowie County 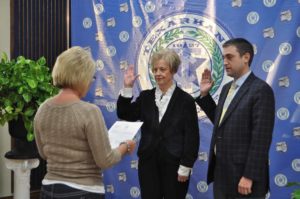 January 22, 2013- Texarkana College Board of Trustees took action tonight to swear in its two newest members who will represent Bowie County’s west end for the first time in the history of the College. Kyle Davis and Anne Farris, who both reside within Bowie County, will serve until November 2013, when all board places will be re-elected.

“I believe that a trustee should have the requisite background and experience to help guide the institution from a policy perspective to better fulfill its educational purposes,” said Davis, a partner in Langon-Davis Attorneys and Counselors at Law, LLP. “It is difficult for a society to rise above the level of its schools, and Bowie County residents recently spoke to this issue by enlarging the Texarkana College district. I consider this an important opportunity for me to be chosen for the open trustee position.”

Davis will represent Precinct 3 (New Boston) and will fill seat 5 on the Board. This seat was previously filled by Jean Cotten who passed away in September 2012.

“I have observed the direction and vision that the Texarkana College Board of Trustees and leadership team have planned for the bright future of Texarkana College, and I am honored to become part of the endeavor as a member of the Board,” said Farris, who recently served as superintendent of Redwater Independent School District.

Farris will represent Bowie County Precinct 3 (DeKalb) and fill seat 2 on the Board of Trustees, previously held by Randy Moore.

The current nine-member Texarkana College Board of Trustees includes new members Davis and Farris along with Mike Sandefur, David Potter II, Terry Taylor, Tom Coleman, Jane Daines, Kaye Ellison and Dr. C. Jack Smith. The College has contacted the Texas Legislature to ask for permission to reduce the board from nine to seven members and hold a county-wide election in November 2013.