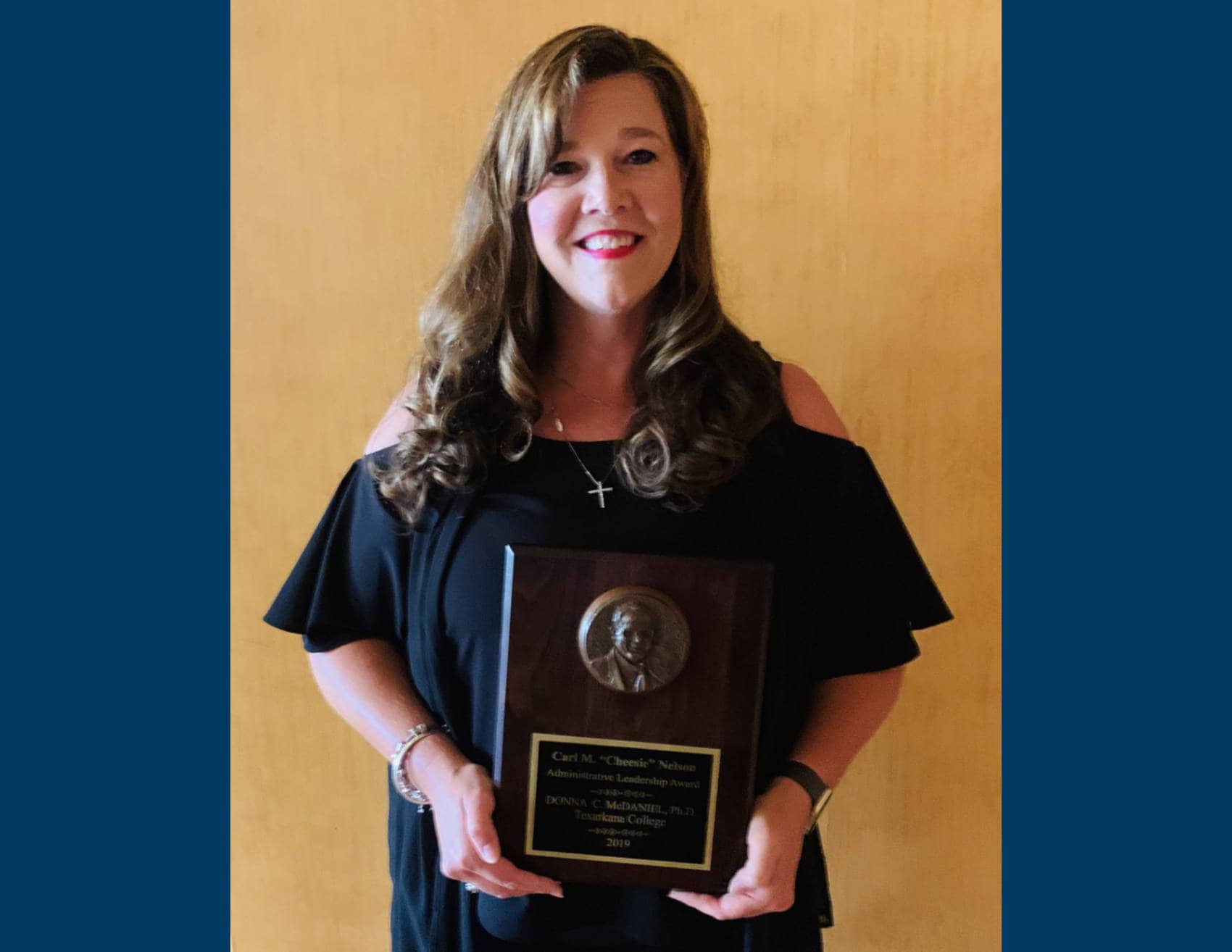 “When I learned about the opportunity to nominate an administrator for consideration of TACC’s Carl M. ‘Cheesie’ Nelson Award, I knew we had just the person on the TC staff who clearly demonstrates all that this award stands for,” Smith said. “In my short time here as president, Dr. McDaniel has gone above and beyond to help me with my transition by leading through example and by sharing her passion for support of student learning and success. We are very honored to have Dr. McDaniel as part of the TC family, and it is evident every day that she exemplifies the same commitment to success that ‘Cheesie’ Nelson established during his time as president at TC.” 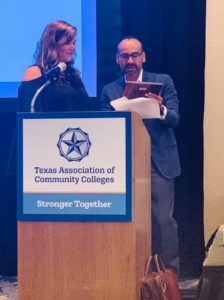 Nelson served as the fifth president of TC from 1975 until his sudden death in July 2001. He was known as a powerful and influential leader throughout the Texarkana community and was a positive force for community colleges in Texas. During his tenure, TC’s student enrollment and campus footprint grew exponentially, and so did support from the state. Nelson took many trips to the state capitol to visit with legislators about the critical role community colleges play in building a skilled workforce. In 2003, following Nelson’s death, TACC established the award to pay tribute to his legacy and to honor community college administrators who embody similar leadership traits.

Smith, who also attended the TACC Summer Meeting, said only one administrator from all 50 Texas community colleges is selected annually to receive the award. The recipient represents the legendary leadership qualities for which Nelson is remembered statewide. Smith said that during the ceremony, TACC President and CEO Jacob Fraire explained that the Nelson award celebrates an exemplary commitment to Texas students, leadership, professional decorum, collaboration, and community engagement.

“It is so important that community colleges raise their own leaders,” Fraire said. “At TACC, we want Dr. Nelson’s legacy of service to continue. The genesis of the Nelson award is to foster the spirit of leadership among community college administrators and recognize those who excel. Of all the nominees for this year’s award, Dr. McDaniel scored the highest in all categories.”

McDaniel joined the TC administrative staff in 2013 during a time when the college was just starting to emerge from near financial ruin. Faculty and staff morale was low and student graduation rates were some of the lowest in the state. Smith said that through McDaniel’s leadership, the college began to regain its culture of sustainability and student success.

“When you think about someone who has a true passion for learning and who is able to pass this excitement on to deans, faculty, and staff, and ultimately students, you are talking about Dr. McDaniel,” said Smith. “Through her leadership, she has helped TC students complete at a greater rate than ever before, placing TC as first in the state of Texas for graduation rates twice over the last three years.”

Smith said McDaniel retooled the way TC connects with students, both in and out of the classroom.

“Dr. McDaniel has improved the student experience at TC by establishing clear pathways that lead students toward meeting their higher education goals,” said Smith. “Through her leadership and vision, she has worked with faculty and staff to implement strategies that help students enroll and complete more efficiently than ever before. In 2018, these strategies earned TC recognition from the national Achieving the Dream organization and led to TC receiving the prestigious Leah Meyer Austin Award for Student Success.”

McDaniel said she is humbled and honored to receive the Nelson Administrative Leadership Award.

“Having worked with Dr. Smith for only six months, I am so fortunate to have his support and appreciation,” said McDaniel. “Those in my position as the chief academic officer can do nothing without the support of the college president and board of trustees.” 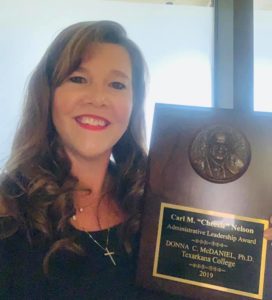 Dr. McDaniel poses with her award at the TACC summer meeting in Horseshoe Bay, Texas.

McDaniel said she has had the privilege of serving with two incredible presidents at TC.

“I have to thank former TC president James Henry Russell for bringing me into higher education and empowering me to transform TC,” McDaniel said. “Through his support and encouragement, I am the leader I am today. I also want to thank Dr. Jason Smith. He came in as our new leader in January and first listened to our team. Then he recognized and acknowledged the team’s great work and encouraged us to make TC even better.”

McDaniel said the challenges TC overcame in recent years pulled the team together.

“The progress and changes made at TC are not mine alone,” said McDaniel. “I am being recognized for this award only because I was able to work with an amazing team of vice presidents, deans, directors, faculty, and staff. They make me a better leader.”

McDaniel said she got her start in higher education at TC right after her high school graduation.

“I was a student at TC when Dr. Nelson was president,” McDaniel said. “I was the traditional community college student who commuted 60 miles round trip to college only to attend class and then go to the mall to work my full-time job. I don’t remember many people during my time at TC, but I do remember the president, Carl M. Nelson. Although he was known as quite a lively character, what I remember the most was that he was a leader who I respected and admired for putting the interest of students first. Never did I dream I would be working as a leader at TC, much less receiving this prestigious award named in his honor.”

In other business, Chief Financial Officer Kim Jones reported that TC is required to hold two public hearings on the proposed tax rate.

“To approve the tax rate, even if it is the same exact rate as we have in the current year, the tax code requires TC to hold two public hearings on the proposed tax rate,” said Jones. “The proposed tax rate will be calculated based on certified property values determined by Bowie County. Estimated tax collections are included in the proposed budget for your review.”

Jones also presented the second draft of the 2019-2020 budget for trustee review and discussion. The administration will continue to work toward a balanced budget until presented for final approval at the August board meeting.