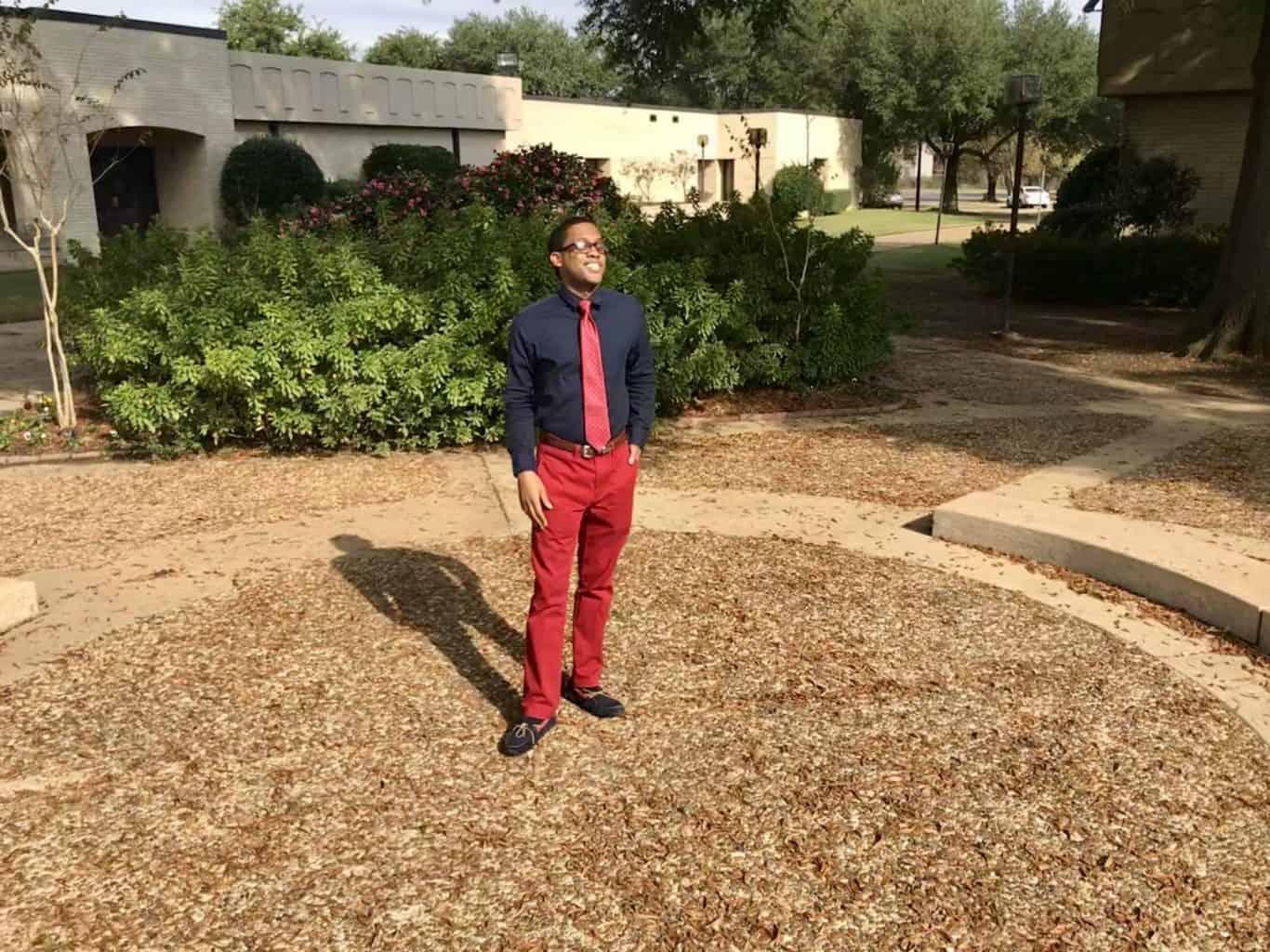 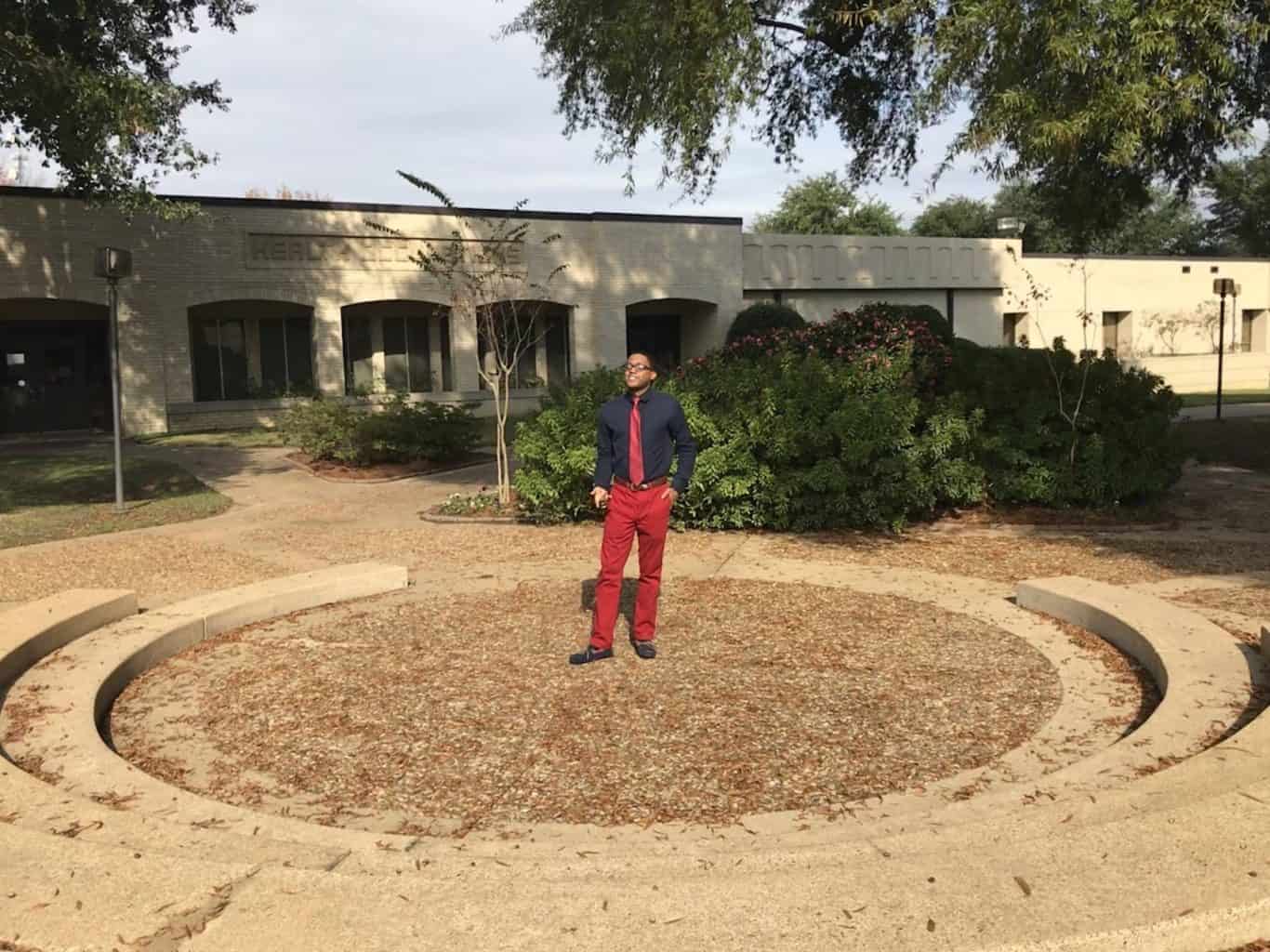 Chaddrick Moore describes the small amphitheater as his favorite place on campus.

“The amphitheater is my favorite place because it describes me. You know, it’s off to the side [and] people say I have this outgoing personality but really, deep in my heart, I’m a low key kind of person. I’m a private person. It’s quiet, it’s serene, there’s trees around us, there’s nature around us, there’s flowers there, and there’s a little bit of everything. I like how you can stand in the center of the amphitheater and if you talk from a certain angle, it’s loud and it’s all in your ears. That’s kind of what I am: loud and all in your ears. It’s a little stage and I always liked the stage. I like to express myself.” His face became more serious for a moment when he clarified, “Not to show off, but to express myself. In everything I express, there’s positivity. To be blessed, you have to be a blessing towards others. That’s the communication that I give.”

“My time at TC has been absolutely amazing, and I’m not just saying that because my employers might [read] this,” he joked. “I’m saying it because I’ve been here since 2013 and it’s safe to say that there is never, ever a dull moment at Texarkana College.”

Chad began his higher education at TC after high school. 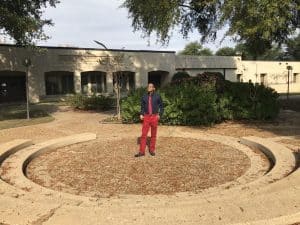 “I was only here for a year. I graduated high school — I’m not going to tell you the year because I want to keep the mystique up,” he laughed. “But I came here for a year. I wasn’t really sure where I wanted to go to college. I’m not even going to lie to you, my mom did everything for me as far as the application and all of that kind of stuff. I thought I would use [that] time to figure out what I’m really interested in.”

Under the instruction of Dr. Phyllis Deal at TC, Chad took an interest in psychology.

After finishing up with his basics, Chad transferred to Stephen F. Austin State University in Nacogdoches, Texas. He earned a bachelor’s degree in psychology with a minor in general business from SFA and is currently taking online classes to obtain a master’s degree in business administration.

When Chad chose a major in psychology, he was not planning on pursuing a career as a counselor or a therapist. The experience of choosing a major he was interested in first and foremost helps him when working with students.

For Chad, a field did come up that tied into psychology outside of traditional careers in the field. He has always been interested in human resources, so when he heard about industrial organizational psychology, he was captivated.

“It’s basically human resources. You know, getting to know everybody in the workplace. When one of my psychology professors mentioned that, I was like ‘Huh, IO psychology. Let’s look into that.’ I don’t plan on getting my master’s in IO psychology, but I do plan on getting some type of certification in human resources.” Chad paused before explaining, “[IO psychology is] the psychology of how things work in the workplace. Making sure that everything is copacetic, smooth, mediating, and being, so to speak, ‘cool’ with all of the departments and not just one. It’s making sure everyone knows you and knows that you’re the go to guy for problems and solutions. That’s kind of the angle I’ve gone with psychology.” 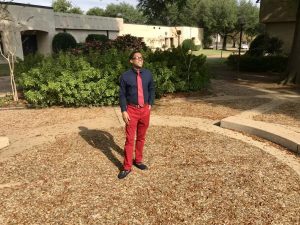 Chad was working at a call center after graduating from SFA and continued to work there until February of 2012 when he was diagnosed with anti-global molecular kidney disease and his kidneys failed.

“I was down for nine months of rebirth,” Chad said, maintaining his ever positive attitude. “I got a kidney transplant on October 31 of 2012, so this past Halloween was my five year anniversary!” Chad let out a few celebratory ‘whoops’ and mentioned how grateful he is that he has overcome that struggle.

“So after that, I’m not going to lie – James Henry Russell is one of my great family friends and he said, ‘You need a new opportunity. You know, this kidney is a new beginning for you, so you need a new opportunity. Let’s find you somewhere at Texarkana College. You seem to be a people person and you seem to be knowledgeable on college itself.’ [He said that] because my parents are educators as well.”

Chad was a financial aid specialist for two weeks before he was moved to admissions by the current director of admissions, Lee Williams.

“I am thankful for him every single day for seeing something in me that I didn’t yet see in myself,” he explained. “They decided I’d be a better fit directly corresponding and directly interacting with the students. I was back there in financial aid and I was behind a big wall.” Chad laughed as he said, “I was wasting a lot of fly outfits! I needed to get out in the lobby, get out in the world, do events, and do stuff that really grazed upon my passions. My passions are communicating with students, mingling with students, and being ‘in the mix’ as I like to call it,” Chad smiled as he shifted on the steps of the ampitheater. “It’s going to be five years in January and I’ve loved every single moment of it.”

Chad says that he only wants to help students to connect the dots.

“The best thing is helping other people find their place, as well,” he said. “That’s the most rewarding part of being an educational opportunity specialist. I just want to get the students from point A to point B. That’s really what I’m passionate about. I want to make sure they get to where they want to go. We all have goals and we all have dreams. I’m not the type of person to say, ‘Well, instead of doing this, how about you do [something different]?’ I’m more like, ‘Hey, you like doing this. Let’s do this so you can do this and that at the same time.’”

If students want to reach Chad, they can stop by his office in the Office of Enrollment Services in the Nelson Administration Building “where all the magic happens.”

“My office is right behind the main welcome desk in the Office of Enrollment Services. It has my name on it: Chaddrick Moore. I have an open door policy,” he grinned. “I mean literally; I don’t have a door on my office so it’s literally open door. Anything that you need help with: if you need help with transferring to another school, if you need help with your FAFSA, or if you graduated with a certificate or an associate degree and you want to come back for something else, I can help you with that as well. The program I’m a part of, the Educational Opportunity Center, we are a government-funded program so we’re technically not associated with TC. So I can help you transfer to any school. Whether it is Texas A&M Texarkana or anyone else. Someone in my office the other day came in and she said that wanted to go to Michigan State. I have someone else that I’m helping go to Texas Southern University in Houston, and I’m going to make that happen.”

Chad said that even though he might put “the busy face” on, he usually has time to talk to students who come by his office unannounced. If a student is not able to come by in person, they can reach Chad via his email (chaddrick.moore@texarkanacollege.edu) or at his office number (903-823-3106).